Key question relating to accounting for convertible debt is how to account for the conversion feature embedded in debt sometimes referred to as “debt host”.

Under current U.S. GAAP, a debtor first makes a determination if it is eligible and, if so, if it elects to account for debt at fair value. If the fair value option was elected, the debt and the embedded conversion option are reported as one liability instrument, measured at fair value.

If the fair value option cannot be or was not elected, the convertible debt may be accounted for under one of the following accounting guidance:

Accounting analysis is performed in the same order as accounting guidance is listed above, i.e. top down. Diagram A, Convertible Debt: Accounting Guidance illustrates application of the accounting rules to convertible debt.

As illustrated in Diagram B, Application of Derivative Accounting Guidance, as part of derivative guidance, the reporting entity needs to address a number of financial reporting questions.

Reporting entity needs to determine if the conversion feature in question satisfies the definition of the derivative. A derivative should include all of the following: 1) underlying, notional amount or payment provision; 2) no or comparatively small initial net investment; 3) net settlement provision (ASC 815-10-15-83). Generally, a conversion option would have first two elements. More attention is devoted to determining if the conversion option meets the net settlement requirement.

In certain situations the debtor can only settle the debt by issuing equity shares (units) determined as follows:

Settlements whereby the debtor settles the value of the conversion option in cash are considered “net” settlements as cash is a highly liquid asset. Similarly, if issuer’s shares are publicly traded, the settlement in such shares may meet the “net” settlement requirements as the shares can be readily converted to cash.

According to ASC 815-10-15-74(a), the reporting entity shall not consider conversion features to be derivative instruments if the feature in question is indexed to entity’s own stock and, if analyzed on its own, the feature would be classified in entity’s equity.

To determine if the instrument is indexed to entity’s stock, US GAAP guidance requires an entity to apply a two-step approach (ASC 815-40-15-7). Step 1 includes the evaluation of instrument’s contingent exercise provisions, if any. Step 2 is focused on the analysis of instrument’s settlement provisions.

As part of Step 1, management should evaluate all contingencies or conditions associated with exercise of investor’s rights under the terms of the instrument. Generally, a contingency based on reporting entity’s stock price or entity’s own operations would not preclude the instrument from being considered indexed to entity’s stock. Exercise contingency linked to entity’s IPO at a nationally recognized stock exchange or listing at an “over-the-counter” market does not prevent equity classification.

As part of Step 2, management should evaluate all adjustments to instrument’s exercise price as well as the amount of issuable shares. Generally, settlement provisions will not preclude equity classification if the exchange terms are as such that fixed number of the entity’s shares is exchanged for a fixed monetary amount, i.e. a fixed exercise price, subject to certain exceptions. The above rule is referred to as “fixed for fixed”.

Certain settlement adjustments designed to protect holder’s economic interest from being diluted by a transaction initiated by an issuer may pass the requirements of the “fixed for fixed” rule. Some qualifying adjustments referred to as standard anti-dilution include stock dividend, stock split, spin-off, rights offering or recapitalization through a large, nonrecurring cash dividend (ASC 815-40-20, Glossary).

Certain other adjustments do not prevent equity classification. Such adjustments include:

Certain debt instruments considered indexed to entity’s own stock may not be classified as conventional. For this type of debt, the reporting entity needs to consider additional equity classification requirements per ASC 815-40-25-10. There are seven additional requirements. The following three requirements often receive the most attention:

For example, let’s assume that an entity issued debt with a principal amount of $ 100 and the conversion price of $ 8/share. According to the settlement terms, the issuer (debt holder) may settle the debt in cash or stock at its discretion. Subsequently, the value of stock increases to $12 and the debt is converted. The entity determined the conversion value to be $ 100 / $ 8 * ($ 12 – $ 8)  or $ 50. The company has the option to pay the conversion spread value either in cash or with 4.2 shares determined as $ 50 / $ 12.

US GAAP offers valuation guidance to determine the value of the CCF. The value is determined as follow:

(carrying amount of debt) – (estimated fair value of debt excluding the CFF but including all other embedded features, if any)

CCF is considered an equity component. Once its value is determined, it should be separated from the convertible instrument and recorded in additional paid-in capital (APIC) by debiting debt discount and crediting APIC. Debt discount created by CCF is amortized over the expected debt term using the effective interest rate method (ASC 470-20-35-13). The amortization period is not reassessed subsequently.

A BCF is defined as a nondetachable conversion feature that is in the money at the debt issuance (commitment) date. BCF is measured at intrinsic value derived from converting debt into stock instead of receiving cash, using the market price on debt issuance (commitment) date. As an example, if the carrying amount of debt is $ 100, the conversion price is $ 8/share while share’s market value at the time when the debt was issued is $ 10/share, the BCF is calculated as 100 / 8 * 10 – 100 or $ 25.

Initially recognized BCF is not remeasured unless, according to the contract, the conversion rate is adjusted upon occurrence of a contingent event. In such cases, the BCF is remeasured when the contingency is resolved. Remeasured BCF is determined using the adjusted contractual conversion rate and the initial market price that existed at the time when the debt was issued.

A BCF should be separated from a convertible instrument and recorded in APIC. From this perspective, accounting for BCF is conceptually similar to accounting for CCF.

Debt discount arising from the above allocation is amortized using the effective interest rate method over the contractual term of the debt agreement.

Convertible debt may be issued at a premium over the principal amount as the proceeds received upon the issuance exceed the principal to be paid at maturity. When considered substantial, in general, the entire premium is allocated to additional paid-in capital (ASC 470-20-25-13).

US GAAP does not define the term “substantial premium.” In practice, the amount of premium at or exceeding 10% of principal is considered substantial.

The issuer will not remeasure subsequently the initial premium amount recognized in equity.

Under current U.S. GAAP, a debt holder first makes a determination if it is eligible and would like to elect to account for debt at its fair value. If not, the convertible debt may be accounted for one the following accounting guidance: Derivative Financial Instruments, Cash Conversion Features (CFF), Beneficial Conversion Feature (BCF), Debt with Significant Premium. If the conversion option is required to be accounted for separately under the derivative guidance, it has to be reported as a liability and measured at fair value initially and subsequently as long as separation requirements continue to be met. Under CCF, BCF and Debt with Significant Premium guidance, the value assigned to the conversion feature is reported separately as part of Additional Paid-in Capital (APIC). Valuation and measurement requirements for CCF, BCF vary depending on the guidance in question. As part of the accounting for convertible debt with significant premium, the entire premium is allocated to APIC. 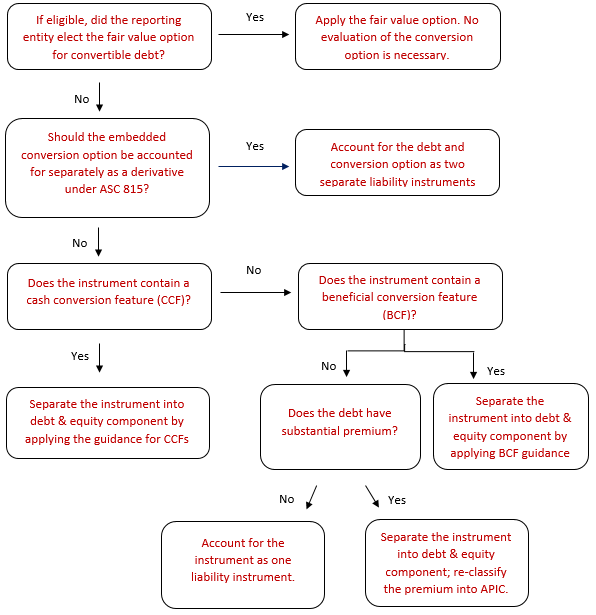 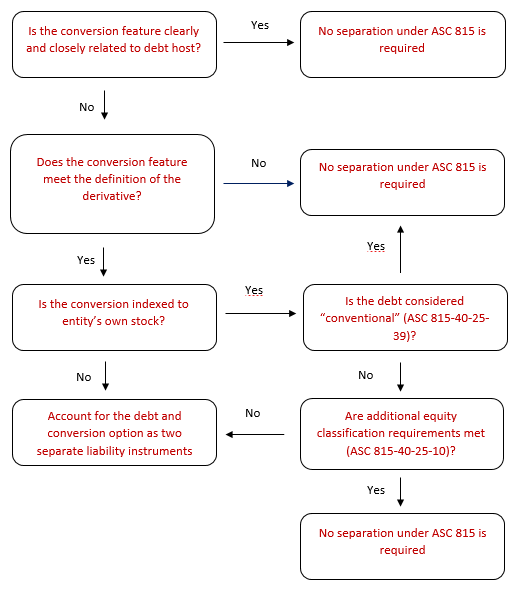 Important Note: FinAcco Consulting LLC is not responsible for, and no person should rely upon, any advice or information presented on this website. Note that entity’s financial statements, including, without limit, the use of generally accepted accounting principles (“GAAP”) to record the effects of any proposed transaction, are the responsibility of management. Therefore, any written comments by FinAcco Consulting LLC about the accounting treatment of selected balances or transactions or the use of GAAP are to serve only as general guidance. Our comments are based on our preliminary understanding of the relevant facts and circumstances and on current authoritative literature. Therefore, our comments are subject to change. FinAcco Consulting LLC does not assume any responsibility for timely updates of its website overall or any information provided in the Insights section of the website, specifically.